Razer is launching the Kishi Universal Gaming Controller for the iPhone. Finally, I’ve got something that gives me an unfair advantage in a Call of Duty game.

It’s a stretchable accessory that can fit most new iPhones, adding game controller analog sticks and buttons to your mobile gaming experience. It connects via the Lightning connector and wraps around the edges of the iPhone.

I used it to play Call of Duty: Mobile. I came in first in two of my first three matches, and in my third match I had 26 kills and one death. It works with Fortnite as well, if you can still play it on your iPhone (some players can do so despite litigation between Epic and Apple, particularly those who don’t have to update the game). And admittedly, maybe there were some bots in my Call of Duty: Mobile battles, but I still did better than usual.

Fortnite in particular is a cross-play game, where mobile players can go up against console and PC players. Usually when that happens, the mobile players get slaughtered because touchscreen controls aren’t as good as a mouse-and-keyboard or gamepad. The Kishi goes a long way toward leveling the playing field.

The Razer Kishi for Android launched earlier this year, and Jeff Grubb played with it. 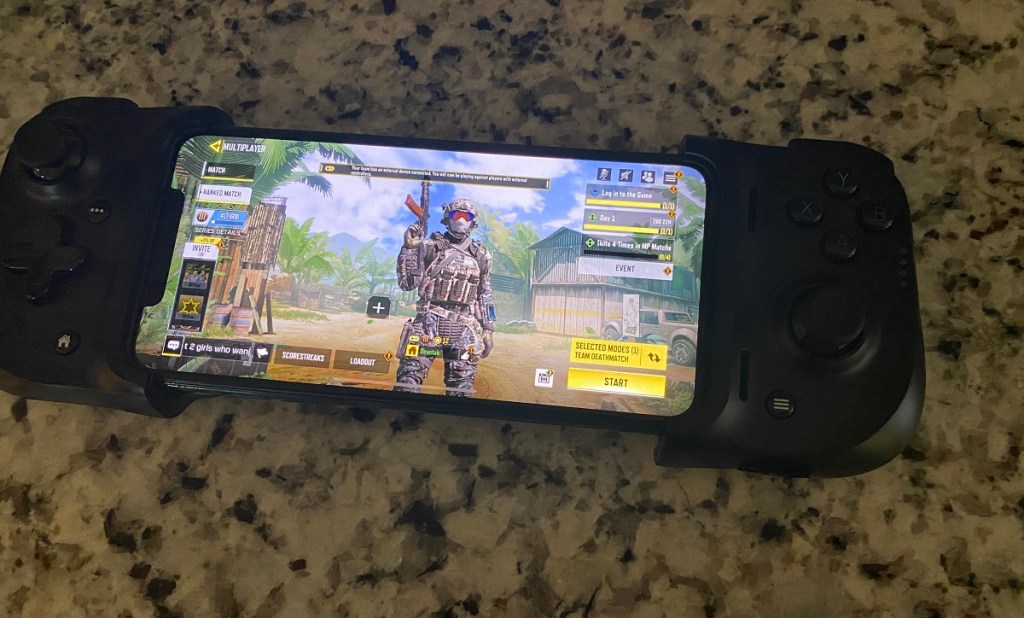 The Kishi has clickable analog thumbsticks, a bunch of face and multi-function buttons, and an 8-way D-pad. The Kishi works with iPhone 6 Plus and newer devices.

The Razer Kishi for iPhone is available now in the Apple Online Store, the first time a Razer product has been featured on the site. It will be available at select Apple stores worldwide on September 22. The design is pretty comfortable, and it made me feel like I was playing with a Nintendo Switch, except with Xbox-like controls. It has passthrough charging so you can charge the iPhone by connecting a charging cable to the controller.

It worked better than other mobile game controller solutions. I’ve used the Rotor Riot wired gamepad, which is a regular game controller that plugs into the Lightning jack via a cable. But it didn’t feel quite as natural as the Kishi. I’ve also used Sentons virtual buttons on the Lenovo Legion Android gaming phone. I’ll write more about the Sentons solution later, but the Kishi does the job better.