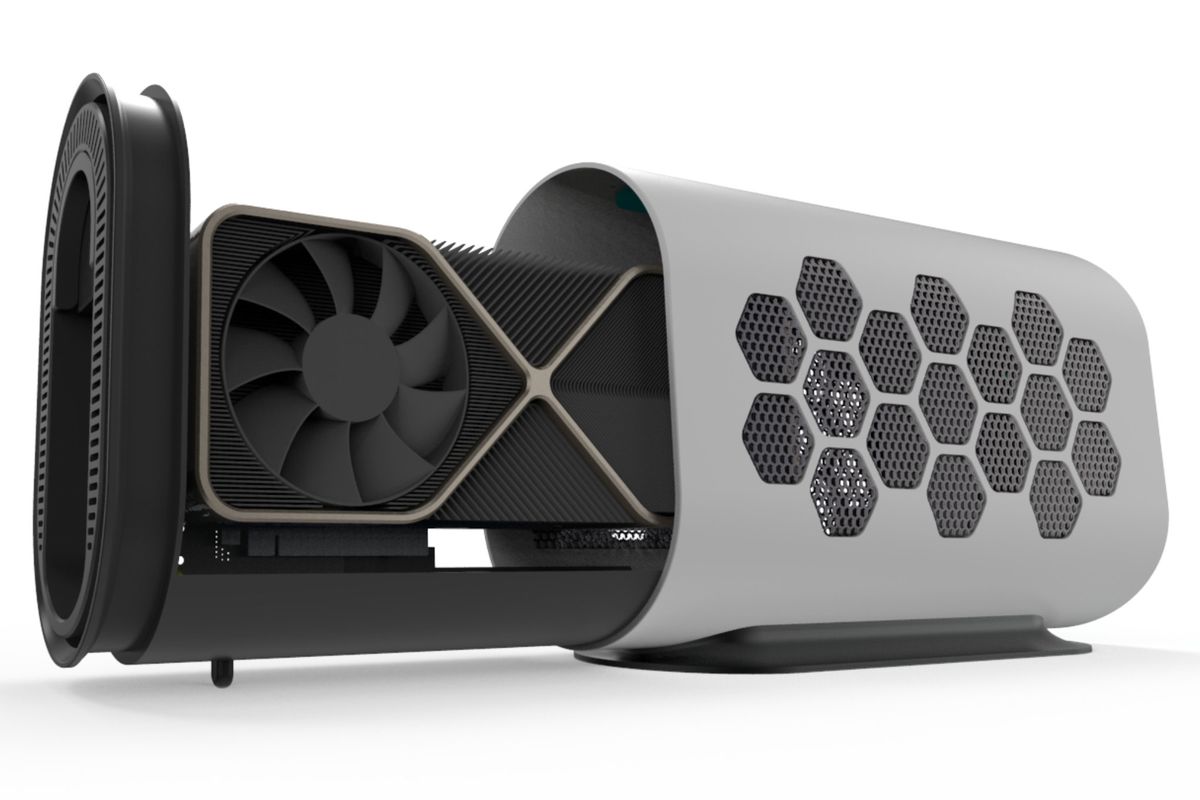 We eulogized the end of Alienware’s graphics amplifier in mid-2021 when Dell discontinued it, but the company is returning to the space with Concept Polaris. It’s a concept for a liquid-cooled external graphics card enclosure with an estimated launch window of early 2022. Alienware doesn’t yet have a price, though its specs and design might make paying a premium worth it for some people.

If you’re unfamiliar with the concept of an eGPU, it’ll help you boost the graphical power of your laptop, provided it has the right ports and assuming you can actually get your hands on a powerful desktop GPU to put in a separate enclosure.

During our in-person walkthrough of the product, Alienware’s team stated repeatedly that the Polaris will connect to laptops via Thunderbolt 4, though the company’s press release that we were given ahead of CES dances around its connectivity altogether. Thunderbolt 4 would make perfect sense given that its new laptops, including the Alienware X14, have at least one of those ports. That means it could also, theoretically, work with laptops from other makers. That’s a big change from previous Alienware eGPUs which relied on proprietary port to connect to older Alienware laptops.

Concept Polaris can house a full-size, 16-inch desktop graphics card like the Nvidia RTX 3090, and with the right card, it should be able to deliver vastly increased graphical performance to laptops that support eGPUs. When connected to an Alienware laptop, the idea is that you’ll be able to change things on the Polaris like the color of its LEDs, as well as control its power levels and temperature limit.

Unlike the previous eGPU from Alienware, Polaris doesn’t also try to fit its power supplies within the confines of the enclosure. Instead, it has two plugs for external power bricks, and Alienware says it has iterated on models that include two 330W AC adapters or two 425W AC adapters, but apparently, it hasn’t landed on one versus the other.

Concept Polaris will feature its share of USB-A and USB-C ports, and a 2.5 gigabit ethernet port. Though, Alienware says that it could support USB 4, which theoretically allows for a higher data and power bandwidth if you have the right cables.

We didn’t get to test out the Polaris during our time at Alienware’s CES pre-brief, as (mysteriously) none of its laptops had games installed on them. It’s possible that Alienware simply wasn’t ready to show it off in time for CES 2022, or that it wanted to free up all of the Wi-Fi bandwidth to make its Concept Nyx demo work as intended. At the very least, it seems to have nailed down an impressive design, though that (and perhaps other aspects of the Polaris) may change a bit before it hits retail.

How to fix Deathloop ‘stuttering’ on PC

How to run the FPS Benchmark for CS:GO