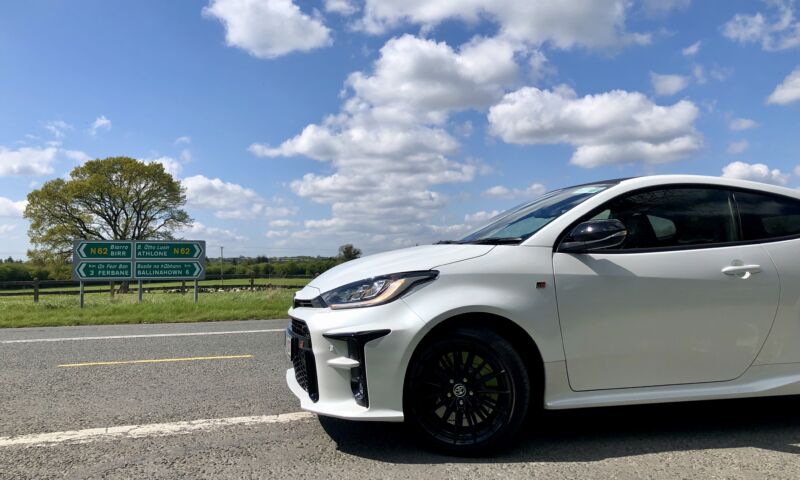 A thumbs-up from the middle-aged mountain bike racer confirmed that the Pearl Ice White Toyota GR Yaris I was testing had hit its target of appealing to adventure-seeking drivers and manual transmission traditionalists. His snap judgment was correct: This car delivers on its promise of being the kind of combustion-fueled fun that is well into its twilight.

American car enthusiasts like to complain that we never get the good stuff in the US market. Last year’s announcement of the Toyota GR Yaris, a World Rally Championship-inspired tidbit of a car, seemed to confirm this glass-is-half-empty viewpoint. But since then, Toyota has revealed plans for a US-market GR Corolla using much of the same hardware.

Will putting the Yaris’ 257 hp (192 kW) turbocharged direct-injected 1.6 L three-cylinder G16E-GTS powerplant into the larger, heavier Corolla spoil the intended experience? We’ve yet to drive the GR Corolla for comparison, but a turn behind the wheel of the GR Yaris while in Ireland suggests that Toyota’s product planners know what they’re doing. The Corolla will enjoy the benefit of more power to offset its weight, as Toyota has announced that it will produce a 300 hp (224 kW) version of this engine, resetting the mark for the world’s strongest three-cylinder engine.

The GR Yaris provides exactly the kind of fun you’d expect from its specifications, delivering sub-5.5-second 0-60 mph acceleration and flyweight agility through mountain switchbacks. Just look at the car! It has a sheet molding compound, carbon fiber-reinforced plastic roof panel for maximum stiffness and minimum weight, just like a BMW M4. The hood, hatch, and door skins are all aluminum for further reduced mass.

The car is a stubby two-door hatchback, ensuring maximum maneuverability and body rigidity, which is also good news for enthusiasts. The back seat is tiny, and the hatch’s cargo hold is tinier still. A couple of suitcases will not fit in the hatch.

Folding the rear seat back to turn the Yaris into a two-seater with a useful amount of cargo space is sensible, considering that nobody would be very happy in that back seat anyway. I appreciated the Yaris’ tidy dimensions on the confines of the Irish roads where I experienced the GR. But in more spacious US conditions, the lack of passenger and storage space would be a significant deterrent to drivers accustomed to SUVs.

That rigid body contributes to the Yaris’ steering precision and suspension control, but it has no evident sound deadening. The car drums with road noise on the highway.

The two-door layout gives the car a sporty, sleek profile, but by attempting to provide some kind of access to the nearly non-existent rear seat, those two doors stretch long enough to remind me of the challenges of getting into and out of a Camaro or Mustang in a snug parking spot without dinging the door of the adjacent car. The market’s general move to four shorter doors and their easier ingress and egress has probably put most US drivers off of coupes permanently.

A press of the dash-mounted start button ignites the three-pot engine to a muted burble. The large circular analog instruments are another nod to the period represented by the car’s manual-shift transmission. They are exactly what the target buyer expects to see in a sporty car, even if younger drivers may be baffled by the Yaris’ “old-fashioned” gauges. Digital readouts on the available head-up display should placate them. The car’s electronically limited 143-mph (230-km/h) top speed went untested.

How carbon emissions got caught up in a Supreme Court showdown

Best Buy will pick up your unwanted tech, appliances, and money

Rocket Lab catches a 1-ton booster falling back from space