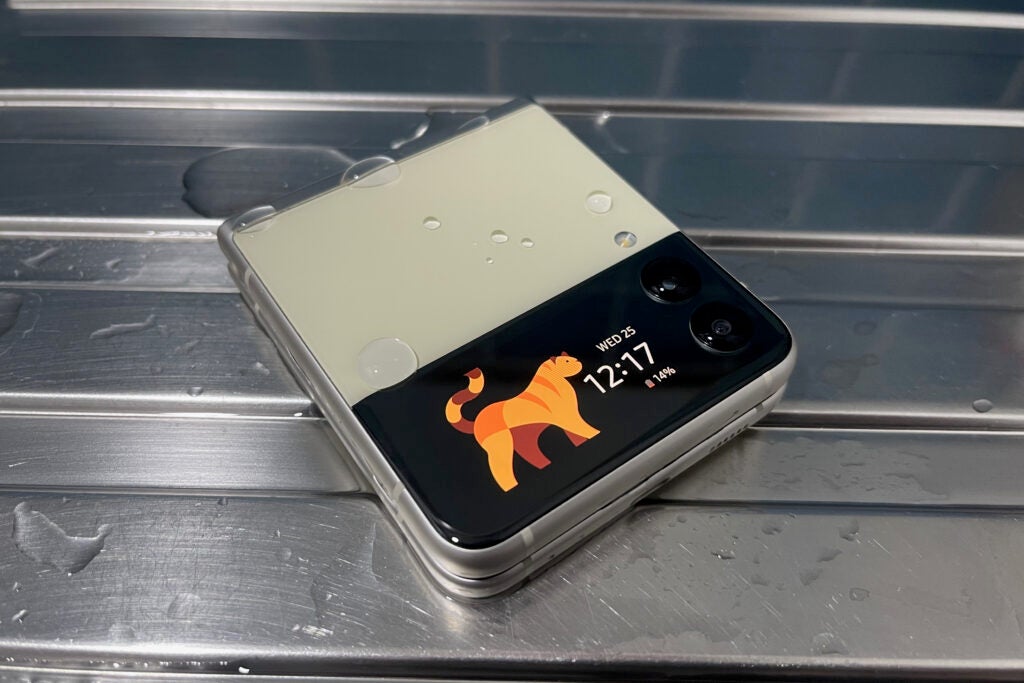 Samsung took to the stage at its Galaxy Unpacked August 2022 event to unveil its latest range of foldables, including the Galaxy Z Flip 4 and the Z Fold 4.

But, how does this year’s Flip compare to its predecessor, 2021’s Galaxy Z Flip 3. Read on to find out what is new and what has changed between the Z Flip 3 and the Z Flip 4 based on the specs, as well as our experiences with each phone.

The Z Flip 4 features the same pocket-sized foldable design as the Z Flip 3, but with a slimmer hinge, straighter edges and thinner bezels around the inner display.

Both phones are water resistant up to IPX8 (something we saw as a major improvement on the Flip 3), while the Flip 4 comes in four colours: Graphite, Pink Gold, Blue and Bora Purple. The Flip 3, on the other hand, is available in a total of seven colours: Phantom Black, Cream, Green, Lavender, Grey, White and Pink (though both phones are available in customisable Bespoke Editions).

However, the cover screen on the newer phone has more customisation options, including new clock designs and backgrounds, such as images, GIFs and videos. You can also use the smaller screen to view notifications as you could on the Flip 3, as well as make calls, respond to texts, unlock your car, make contactless payments and control your SmartThings devices – all without opening up your phone.

Both generations of the Z Flip phone feature dual 12-megapixel cameras and a 10-megapixel selfie camera.

The Z Flip 4 also benefits from a 65% brighter sensor, as well as FlexCam. This allows you to take hands-free photos at a variety of different angles and is optimised for third-party apps, like Instagram, WhatsApp and Facebook.

There’s also Quick Shot, which allows you to snap high-quality selfies using the main camera and see a preview on the Flip’s cover screen.

Samsung has of course updated the chipset powering the phone taking the Snapdragon 888 with 8GB in the Z Flip 3 and replacing it with the newer Snapdragon 8+ Gen 1 processor with 8GB RAM. The maximum storage configuration has also been increased from 256GB to 512GB in the Z Flip 4.

Both phones support 5G and both run Samsung’s One UI based on Android 12.

Another major update coming with the Z Flip 4 is a larger battery. Where the Z Flip 3 packed a 3300mAh battery, its successor takes advantage of a 3700mAh one. The endurance wasn’t great on the Z Flip 3, so we’re interested to see whether it improves with this iteration.

Both phones support Fast Charging, Fast Wireless Charging and Wireless PowerShare, but the Z Flip 4 is capable of hitting 50% battery after just 30 minutes plugged in with the help of Super Fast Charging.

All-in-all, the Z Flip 4 seems to offer a subtle but positive update on the Z Flip3. Some notable differences include its slimmer hinge, larger battery, brighter camera sensor and increased customisation options, all of which you can read more about in our first impressions of the phone.

How to clear your cache in Safari
What is the LG Flex TV?
Now Xbox wireless controllers are proving hard to come by
Will Virgin Media's Stream save you money?
Gorilla Glass Victus 2 conquers your phone screen's arch nemesis – concrete
How to get all the Nike watch faces on any Apple Watch