The “American Dream” is often associated with imagery of spacious estates adorned with white picket fences, wrap-around porches, and sprawling green lawns that seem to go on forever.

But in reality, modern American life has become much more compact. Over the last few decades, the typical lot size in the U.S. has decreased significantly—from 18,760 square feet in 1978 to 13,896 in 2020.

While lot sizes are getting smaller overall, there are still large discrepancies in lot sizes from state to state. This graphic by Angi uses data from the 2022 U.S. Lot Size Index to show the median lot size in every U.S. State, using data from 312,456 Zillow listings as of May 2022.

When it comes to the states with the largest plots of land, New England dominates the ranking, with Vermont, New Hampshire, and Maine at the top of the list.

New England was one of the first regions settled by the Europeans in Colonial America. This long history, along with a large rural population, could explain why the area has strict zoning policies that limit density and require large minimum lot sizes for new builds.

On the opposite end of the spectrum, Nevada ranks as the state with the smallest median lot size:

One possible explanation is that Nevada’s population boom—and subsequent development—is relatively recent. Newer homes listed in the dataset tend to have smaller lot sizes, and in Nevada, 34.6% of homes included in the research were built in 2000 or later.

Generally speaking, the states with the biggest lots also tend to have the cheapest land when broken down per square foot. For instance, in Vermont, properties sold for a median $5.95 per square foot. 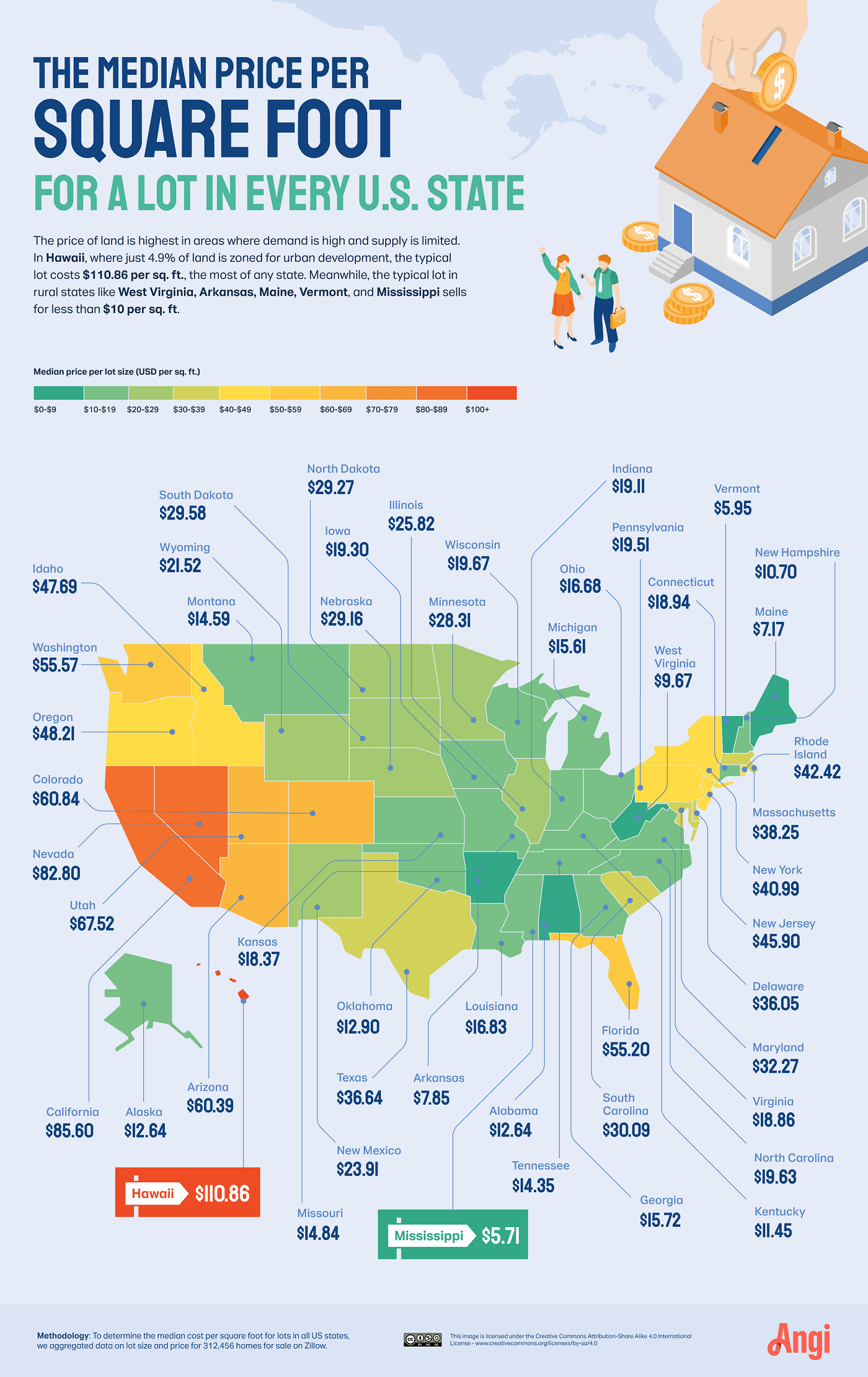 On the flip side, in Nevada, land sold for a median $82.80 per square foot—that’s the third most expensive of any state.

Of course, other factors are at play here when it comes to the cost of land. Like anything else that’s for sale, the price of a lot is governed largely by the laws of supply and demand.

For example, housing supply is scarce in Hawaii, where only 4.9% of the land is zoned for residential development, and the median home size is much smaller than in other parts of the country. Not surprisingly, the median plot of land in Hawaii costs $110.86 per square foot, the most expensive on the list.

The Future of Housing in America

Lot sizes remain relatively large in some states for now, but as the U.S. population continues to become more urbanized, living conditions in America could get even tighter.

Will America hold onto its spacious way of living, or could life in the U.S. start to resemble more densely populated regions in the future?

The post The Median Lot Size in Every U.S. State in 2022 appeared first on Visual Capitalist.

Should You Invest in Disruptive Materials?
Ranked: The World’s Most Surveilled Cities
Visualizing the Odds of Dying from Various Accidents
Ranked: America’s Best States to Do Business In
Putting Pet Health First: Chronic Illnesses in Dogs and Cats
The Next Generation of Uranium Deposits