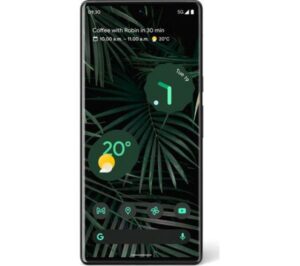 Black Friday may be in the rear-view mirror but that hasn’t stopped some of the sale’s best bargains from reappearing, like this incredible deal on the Pixel 6 Pro.

If you head on over to Currys right now and use the code PIXEL100 at the checkout, then you can bag yourself a brand new Pixel 6 Pro for just £499 – that’s an unbelievable mid-range price for what is still a top-tier handset.

This deal isn’t the only survivor from the Black Friday sale either. If you want to see what other deals have managed to live past their expiration date then head on over to our round-up of the best Black Friday and Cyber Monday deals.

Back to the deal at hand however, it’s still somewhat baffling to see a phone as powerful as the Pixel 6 Pro fall to such a cheap price. For context, the latest iPhone SE has a starting price of 449, and while that affords users access to iOS, it has a far less powerful screen than the Pixel 6 Pro, and Google’s offering absolutely dominates the competition at this price where cameras are concerned.

The Pixel 6 Pro has plummeted to the same price as a mid-range handset, meaning that you can get a bunch of flagship features for a signficiantly reduced price. Just use the code PIXEL100 at the checkout.

The phone itself scored a well-earned 4.5-star rating in our review, with the camera verdict reading: “The main camera performs excellently. Testing it directly against the similarly priced Galaxy S21 Plus, I preferred the images taken on the Pixel 6 Pro in nearly every instance. This is largely because Google’s processing is so much better than on any other phone.”

Plus, this is before you even consider the Tensor chipset that sits inside the Pixel 6 Pro – a SoC that allows for some seriously impressive features including super fast dictation and real-time translation. When it comes to Android phones, very few handsets can compete with the chops offer by the Pixel 6 Pro.

Because this deal was introduced during the Black Friday sale, it’s hard to specify as to how much longer it’ll be around for, but if you find yourself tempted by this incredible offer then don’t forget to use the code PIXEL100 to nab it.